If you’ve read my background summation within the Homepage and General Sessions section of my site, you’ll have surmised that I’m equipped to carry out many of the more specialist fetishes- those which ordinarily carry more risk unless performed in the hands of a fully competent Dominant.

Because of the invasive nature of these practices and the risk of exposure to bloodborne pathogens, it’s an activity that requires expertise and diligence. Care must be taken to follow all appropriate safety precautions when engaging in this activity in order to avoid infection or injury. I take my part in this responsibility very seriously and will never agree to anything which, in my view, constitutes a real danger to my clients. I expect honest and full disclosure from prospective clients.

So why is it sought after? Like most practices, it’s because it feels good – as part of a BDSM scene, needle play can produce a natural and long-lasting endorphin rush that can last for hours. The physiology of the hormone production produces a kind of blissful sub-state, tranquil yet with heightened sensory awareness. In addition, the aesthetics of the needles themselves have appeal, there’s an attraction to the pattern of the needles as they are inserted, the inclusion of sutures, or the adornments attached to the needles (lacing for instance). For some, needle play is linked to a particular medical fetish. More about that later.

When my subject comes to me curious but with a mixed bag of nervous emotions yet still willing to try it, I speak very calmly and softly, make deliberate eye contact and encourage him to take slow, relaxing breaths. It’s only once I intuit they are calm, I bring out my needles and commence.

There are 4 main types of needles used in needle play :

The most popular placements for needlework tend to be the fleshier erogenous areas of the body, thighs, bottom, abdomen, back and genitals (nowhere is really off limits aside from the eye area). Needles may be placed side-by-side or used to create crisscross patterns like a “button”, where one needle sits below a needle that’s already been placed. 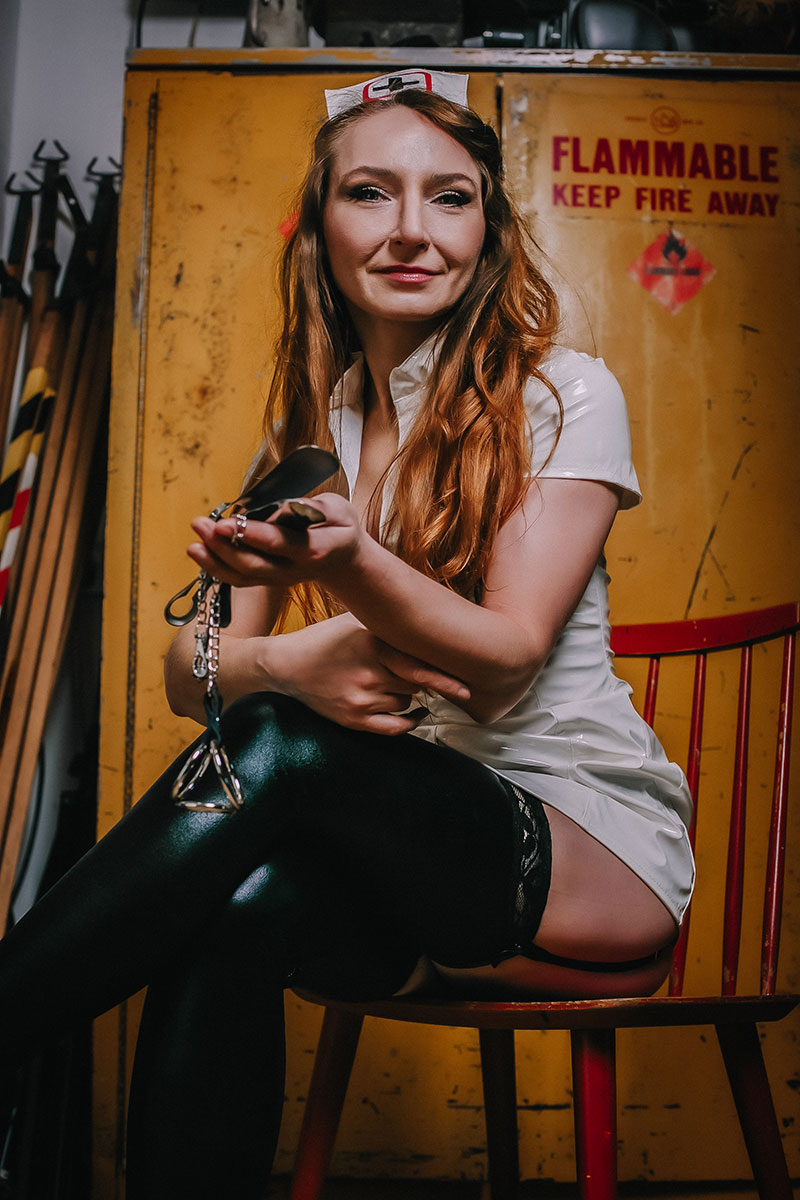 Perhaps you like the thought of being prepared for a gastric operation requiring an enema. The humiliating torture of watching me in full nurse whites as I set up my system to flush you clean? For those with a penchant for sounding, and catheterisation, I’ve got all the equipment to make your eyes stand out on stalks… the question is how much can you stand?

I also offer scrotal infusions if that is your fantasy; I certainly enjoy witnessing the swelling as your balls turn into the equivalent of giant water balloons.

And for those with an interest in the historic method of healing…how about a little session in leech therapy?